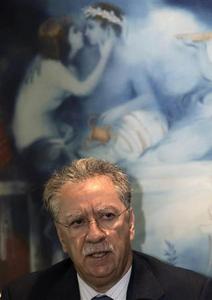 By Stephen Grey and Nikolas Leontopoulos

(Reuters) – The chairman of one of Greece’s largest banks and his family took out loans totaling more than 100 million euros to finance an undisclosed stake in the bank, according to audit documents seen by Reuters.

Offshore companies owned by Michael Sallas and his two children paid for shares in the Piraeus Bank, the country’s fourth-biggest, by borrowing money from a rival bank.

Together the shares make the Sallas family the largest shareholder in Piraeus, with a combined stake of over 6 percent. The purchase of these shares has not been declared to the Athens stock exchange by Piraeus.

The loans to Sallas, who was executive chairman of Piraeus Bank until last month and remains its non-executive chairman, raise new questions about the stability and supervision of the Greek financial system at a time when European taxpayers and the International Monetary Fund are bailing out its banks with more than 30 billion euros.

The IMF had no comment on the issue, and a spokesman for the Bank of Greece declined to comment on Sallas’s holdings in Piraeus, citing banking confidentiality guidelines. “Our supervision department cannot comment on specific prudential data available or actions taken with regard to any specific bank as such information is confidential,” he said.

According to audit reports seen by Reuters, most of the money borrowed by companies linked to Sallas was used to buy shares in a Piraeus Bank rights issue in January 2011. The issue was designed to strengthen Piraeus’s capital base.

The disclosure highlights concerns that Greek banks have been borrowing money from each other and using it to meet recapitalization requirements, but not making that clear.

“This (the Greek financial system) is a closed circuit, operating as a system of power with no transparency and effective supervision,” said Louka Katseli, professor of economics at the University of Athens and former Greek minister of economy. “Through triangle deals between banks, businessmen and other banks, capitalization requirements were fulfilled without new money injected.”

Piraeus Bank and Sallas declined to answer specific questions for this story, but offered an interview later this month. On Sunday Sallas issued a statement to the Greek media attacking Reuters and accusing the news agency of “slandering” and “undermining” the bank.