This first appeared on Reuters.com 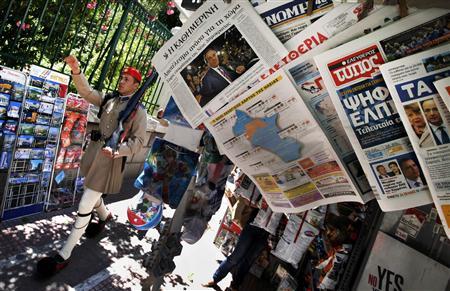 A nexus of media, business and politics lies behind the country’s crisis, say critics.

By Stephen Grey and Dina Kyriakidou

(Reuters) – In late 2011 the Greek finance minister made an impassioned plea for help to rescue his country from financial ruin.

“We need a national collective effort: all of us have to carry the burden together,” announced Evangelos Venizelos, who has since become leader of the socialist party PASOK. “We need something that will be fair and socially acceptable.”

It was meant to be a call to arms; it ended up highlighting a key weakness in Greece‘s attempts to reform.

Venizelos’ idea was a new tax on property, levied via electricity bills to make it hard to dodge. The public were furious and the press echoed the outrage, labeling the tax ‘haratsi’ after a hated levy the Ottomans once imposed on Greeks. The name stuck and George Papandreou, then prime minister, felt compelled to plead with voters: “Let’s all lose something so that we don’t lose everything.”

But not everyone would lose under the tax. Two months ago an electricity industry insider revealed that some of the biggest businesses in the land, including media groups, were paying less than half the full rate, or not paying the tax at all. Nikos Fotopoulos, a union leader at power company PPC, claimed they had been given exemptions.

“It was a gift to the real bosses, the real owners of the country,” he said. “The rich don’t pay, even at this time.”

This time the media made little fuss. “The news was not covered by the media … because media owners were among those favored,” Fotopoulos said later. Leading daily newspapers in Athens either did not mention or downplayed his claims, a review by Reuters found.

To many observers the episode illustrates the interplay between politics, big business and powerful media owners. The interwoven interests of these sectors, though not necessarily illegal or improper, are seen as an obstacle to Greece’s attempts to rescue its economy. They are, say critics, partly to blame for the current crisis and for hindering reform.